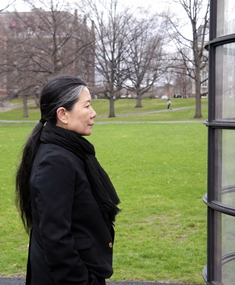 Kimsooja (born 1957) is a South Korean multi-disciplinary conceptual artist based in New York, Paris and Seoul.

She began her career after graduating from HongIk University in the mid-1980s. Subsequent to an artist residency at PS1 Moma in 1992, she developed a body of sewn works concerned with nomadism, migration, interpersonal relationships, and women’s role in society. She further evoked these themes in video performances where she established her body in performance as a metaphoric needle that weaves through the fabric of space and time.

In 1999, Kimsooja presented her most iconic video performance, A Needle Woman, where she appears in the middle of crowds, dressed entirely in black and with her back to the camera, standing still amidst passersby of major metropolitan areas such as Tokyo, Shanghai, Delhi, New York, Mexico City, Lagos, London, and Patan, Nepal.

In subsequent video performances the artist further established the themes of immobility, non-making, and migration as central topics in her work. She was seen standing still across the Yamuna River in A Laundry Woman and traveled atop a truck through Korean cities and country in Cities on the Move.

Her practice also includes site-specific installations that are all linked through their relational use of light and sound. For the Palacio de Cristal in Madrid she transformed the architecture of the palace into a mirrored environment where sunlight was diffracted through the glass structure and accompanied by the sound of the artist’s breathing. She projected her piece To Breathe: Invisible Mirror/ Invisible Needle, a color spectrum that evolves with the sound of the artist’s breathing, at the Fenice theater in Venice; and laid down a mirrored floor and diffracting daylight installation, To Breathe: Bottari, for the 55th Venice Biennale Korean Pavilion. Other notable public commissions include A Needle Woman: Galaxy was a Memory, Earth is a Souvenir (2014); a monumental 46-foot-tall sculpture, commissioned and installed for the Cornell Council for the Arts 2014 Biennial on the campus of Cornell University.

Kimsooja participated in more than 30 international biennials and triennials; including the 9th Kwangju Biennale; the 24th Sao Paulo Biennale in 1998 and the 55th Venice Biennale Korean Pavilion in 2013. In 2005 she was commissioned a public performance for Creative Times in Times Square, New York. Her most recent work, Thread Routes, an anthropological poem in six chapters shot in South America, China, and Europe, was recently shown as a 3 channel video installation at the Guggenheim Bilbao, Spain.