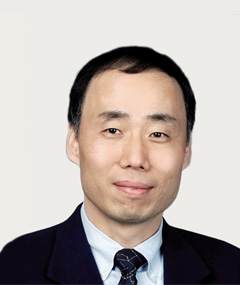 Dr. Kyung-Suk Kim has played a central role in understanding and utilizing mechanical behavior of nanostructures by developing creative theories and conducting precision experiments. In particular, he leads his respective field of research by providing fundamental theories for the motion and deformation as well as for the formation and assembly of nanostructures. Dr. Kim has led the establishment of the single-asperity friction law, using dislocation models to explain the nano and micro single-asperity-contact friction phenomena observed in the experiments of atomic force microscope (AFM) and surface force apparatus (SFA).

In addition, Dr. Kim has provided an epoch-making method of measuring surface residual stresses in a fine scale, accurately formulating the self-organization principle of surface nanostructures in the evolution of surface roughness caused by stress during chemical etching. In such nano-mechanics research, Dr. Kim has invented about 10 new instruments and analytical methods including the transverse displacement interferometer, the surface roughness evolution spectroscope, the ultra-resolution curvature interferometer, and the continuum field projection method. In particular, the ultra-resolution curvature interferometer has improved the resolution of the curvature measurement by factor of about 2000 compared to existing curvature sensors, and it is expected to make significant contributions to the study of formation and assembly of semiconductor surface quantum dots as well as self-organization of nano bio-molecular structures. Dr. Kim has been active in research, publishing about 90 articles, editing three books in the field of nano and micro mechanics, organizing the first international nanomechanics workshop in 1999, and serving as Chairman of the Thin Film & Nano Structures symposium for the International Congress of Theoretical and Applied Mechanics (ICTAM) held in 2004.